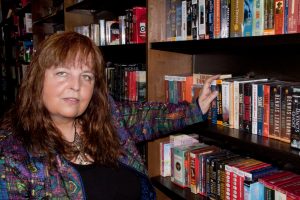 Although originally from California, Lou resides in the Pacific Northwest with family and a herd of cats who like to block her computer screen whenever possible. Before turning to writing full time, she was an engineer and project manager. When not writing, Lou quilts for charity and edits on a pro-bono basis for other authors.

Early work was horror and suspense, later work morphed into a combination of magical realism, mystery and adventure painted with a horrific element as needed.

I’m one of those writers who doesn’t plan ahead, no outlines, no clue, and sometimes write myself into a corner. Atmospheric music in the background helps entice the moodier muse that must be present. Black by Pearl Jam is one that really helps.

2003: Honorable mention from Ellen Datlow in The Years Best Fantasy and Horror for one of my short stories.

May 1, 2009, Booklist published a favorable review of my contribution to the anthology. This was a very happy day.

2009: Three books written. Sea of the Vanities, Farm Hall, and Circle of Fifths.

2010: In Memory of the Sibylline, was accepted into the best-selling anthology edited by Charlaine Harris–Crimes by Moonlight. At the time I was the only non-agented, non-book published author accepted into the anthology. The Celwyn series begins. A few months later I hooked up with my agent, Justin Bell of Spectrum Literary.

2018 to present, The Celwyn book series: The Violins Played before Junstan, Music Shall Untune the Sky, The Raven and the Pig, The Pirate Danced and the Automat Died, The Wyvern, the Pirate, and the Madman.