The Violins Played before Junstan 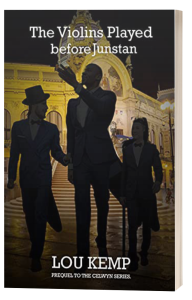 At first, the immortal peyote-eating magician Celwyn is hired to deliver an automat, Professor Kang, to a priest called Talos. Everything Talos told Celwyn was a lie, and by the time their ship, the Zelda, encounters a terrific storm in the Arctic Circle, Celwyn finds he must reconsider his allegiance.

He chooses Kang, and they travel to Singapore, preparing to journey west. In order to deflect the attention of the city’s police, they allow an American heiress to go with them as she escapes matrimony to seek adventure. Her crazy aunt hops another train, and the pursuit is on. The third member of their friendship is from Juba in the Sudan; a widower, scholar, and brave but superstitious man. Their deep friendship grows as they battle several malevolent forces at the same time, and rescue two orphans along the way. Celwyn has avoided caring about anyone for hundreds of years, and now must learn the cost of friendship, and loss.

Eventually they reach Prague. The culmination of their battles with evil occurs on the Vltava River under the shadow of the Prague Opera House. As always, it is accompanied by the ethereal music of the