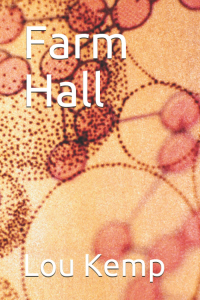 The novel is initially based upon fact. When the Reich fell in 1945, the Allies rounded up Hitler’s top ten atomic scientists and transported them to Farm Hall, a mansion in the English countryside. Their intent was to seduce the scientists into working on the Manhattan Project. The fictionalization begins with Major Oliver as the M16 officer in charge of the scientists. As the first few days go by, he finds them impish, mysterious, and full of “marinated craziness.” Oliver also discovers an unsettling amount of strange occurrences he can’t explain, such as the shredded civilians from Hiroshima appearing in the dining room of Farm Hall. When one of the scientists is murdered, the woman smuggled into the mansion that night is suspected. Eventually Oliver becomes very close to her, finding that she pursues Pelaez, the immortal magician, who masquerades as one of the scientists. Pelaez wants to stop the war, all wars, and intends to sabotage the Manhattan Project. Major Oliver is in the way.

All night armed American guards had driven us through the French countryside in darkness that seemed as hushed as a convent after the continual noise of the war.

When we reached Paris, notorious for quaint cubbyholes, the Americans had managed to deposit us in one that reeked of onions and ammonia.  To complete our comfort, we had petite wooden stools to sit upon and a thermos of cold coffee. Outside the little room of smells, a street of boarded doors and broken windows reflected light from a dreary dawn.

“I wonder if Kant is alive.  And the rest,” Gruber muttered.

We had discussed this in low whispers whenever the guards left us alone.  As only three of Hitler’s pet scientists, how many of our group had survived the fall of the Reich?  Berlin only surrendered a week ago.  Hitler too, in theory.  But I doubted an egomaniac of his magnitude would really commit suicide as the Americans said..

Since then, Baba and I had been bandied about by the Americans like prizes from a carnival.  Squeezed, admired, and handled carefully.  Why? Because they thought we had atomic secrets they needed.  Perhaps secrets our captors would kill for.

One of the guards stuck his shaved head through the doorway.  Baba smiled at him and said in English, “How much longer, my friend?”

“I am not your friend, you German bastard.”  The guard glared.  “We’re waiting for more of your lot.”

“Then the brass will give you a kiss and put you on a plane.”  We were treated to a view of his nicotine-stained teeth and the seething hatred in his eyes as he added, “Maybe it will go down in the Channel, just like our boys did.”

The Dakota dipped a wing toward the English countryside, revealing a large red-brick manor sitting amidst hundreds of acres of lush landscape.  A river twisted through the surrounding woods like a silver ribbon.

Otto Bothe peered out the window of the plane and whispered, “Our new prison reminds me of a park in Mǜnster where the deviants used to play.”

“It will be a long time until you see Mǜnster again or consume a strudel worthy of the name,” Maxwell Kant rumbled.  He turned to me, “You agree, Felix?”

I nodded as I studied the chess board beside me.  Though unlike Kant, I did not feel homesick.  The Fatherland meant nothing to me anymore.

I sighed with the first sense of hope I’d felt in weeks as the Dakota circled the fields for another pass over the manor.  Pairs of guards and dogs patrolled the perimeter of the estate.  No matter how pretty the scenery, we would be treated as enemies.  Knowing some of my fellow scientists as I did, that would be very good idea.

Bothe stammered, “I ..w..wonder what they’ll do with us?”

I patted his hand with as much assurance as I could.

He peeked over my shoulder at the English soldiers sitting behind us.

“Cheer up, chaps!”  A freshly pressed British uniform halted beside my right elbow.  Bars and medals attached to the man’s chest sparkled as sunlight slanted in from the portholes.  The sun felt like a caress after the dreariness of Paris.  Major T. A. Oliver spoke in clipped and precise German.  “Fortunately, the Nazis missed bombing this little spot of paradise.”

Johann Fromm winced at Oliver’s words and then buried his face in his book.  Perhaps he hoped to escape to where there was no war, no torture, and no bombs.  Heil Hitler!

Oliver assessed us each in turn, not merely a passing glance but deep eye contact intended to intimidate.  When he came to me, I returned the stare, unblinking as a snake.

As the English Major settled into his seat, his mouth fell open and he stared out the window of the plane.  His attention seemed to be centered on the tip of the right wing.  He checked the left wing, and then looked out the right side of the plane again.  I smiled.  His expression reminded me of a man I’d observed eating a fistful of sardines at a fair in Marseilles: the Major couldn’t swallow what he had just seen.

He seemed a bit uncertain as he looked at the rest of us out of the corner of his eye, wondering if we’d noticed anything.  No one reacted, not even a belch from Baba’s over-stuffed belly.  I yawned.  Oliver glanced out the porthole again and shook his head.

Several minutes passed until he regained his composure.  The Major stood and addressed us in English. “The ten of you are our guests.  England is honored to have you here, gentlemen.”

Hoffman pretended to read, but he never turned any pages.  My fellow scientists nodded or attempted a response—and some of us found it so very hard to act as if everything was normal; as if we’d accepted an invitation to summer in the countryside instead of being dragged away against our will.  A single tear escaped from Bothe’s eye as he stared out the window along with Hoffman.

Baba Messinger pushed his knight forward, smiled a smile that said he’d just cut off my balls, and rasped, “Your turn, Felix.”

Miles away from the manor, the plane found a landing strip, pointed its nose downward, and coasted to a stop.  I followed Fromm down the short steps until I stood on English soil.  The very act represented one step toward my goal.  America.

The anticipation must have shown on my face; one of the guards frowned at my expression, a reminder that I must control my enthusiasm.  A prisoner should appear oppressed, even though all of my dreams of life after the war had come to fruition.

At the foot of the gangway, Major Oliver introduced the ten of us to his superior officer, the short and pudgy General Avery, who shook our hands with an inordinate amount of goodwill.

Moments later, as the cavalcade of black salon cars purred through the village of Godmanchester, curious faces tried to peer inside the automobiles.  Gruber pulled his fedora lower across his face and looked away.  I was tempted to wave, but that would only provoke our hosts.

The British General, Avery, appeared to be out of humor.  He had snapped a few orders to Major Oliver upon joining us in the automobile and then withdrew to his own thoughts.  With the general’s colorless eyes and a forgettable face, I imagined the M16 chaps had recruited him on the spot.

Major Oliver draped an arm over the front seat and turned to address the General. “Sir, will you be joining us for luncheon?”

Avery glared and responded with a terse, “Of course.”

Oliver hesitated, perhaps to question the general’s reaction, pursed his lips, and then faced the front again.  The General continued to ignore the rest of us as he brooded about something.  What with the British General’s silence, Eichen’s obsession with the buttons on his shirt, and Messinger pouting over losing a chess game, I only had the nameless guards to converse with; my own counsel seemed preferable.

Should we plot and scheme, enter into alliances bound by blood or country?  Perhaps we should ingratiate ourselves for morsels of information.  Or turn the tables and spy on our captors?  Major Oliver appeared to be a man of integrity.  It showed in the sternness of his bearing and in the straight way he regarded whomever he spoke to; it would be interesting to test that trait.  The entertainment possibilities ahead of us seemed endless, not to mention that my fellow scientists represented a caldron of phobias, perversions and depths of paranoia I had not yet stirred.

The lead salon car carrying half of our party slowed as they came upon a tall perimeter wall.  As we decelerated and followed the other car down a driveway, trees hundreds of years old crowded the car on each side.  Through them I perceived acres of grass and manicured hedges bordering and sun-kissed fields in the distance.  Like a harbinger of woe, a black bird flew with us, dipping through the trees and soaring higher as we slowed.  A moment later we rolled to a stop in front of the three-story Georgian manor we’d seen from the air.  Farm Hall.

As we piled out of the automobiles and stretched, a collection of young men met us (and where did they find able-bodied young men after a war?).  Major Oliver produced a sheet of paper from his coat pocket.

“Gentlemen, I am in charge of Farm Hall.”  He surveyed each of us, making sure we were watching him, and then continued, “During your stay here a personal assistant is assigned to each of you.  We refer to them as ‘batmen.’  You may count on them to find necessities we’ve overlooked, relay messages to us, and perform simple valet duties.  They will also function as house staff for serving meals and keeping everything ship-shape.”

I eyed the batmen.  Their ages ranged from late teens to their early thirties.  All of their shoes looked new and rather cheap.  Perhaps our captors did not have a great deal of time to prepare for our arrival.  As I studied them my initial curiosity was partially answered: two of the batmen stood at attention in the prescribed military manner with their hands back and chests out.  The origins of the others, while not appearing to be common servants, seemed less easy to decipher.  Yet.  Who would be bribable?  Who would snub us or try to poison us?

The soldiers heaped our luggage into a pile in front of the cars.  On the other side of the central fountain a trio of guards dressed in strict uniforms and humorless eyes looked, but didn’t look at us.  Van Dorn sidled to the rear of Baba, seeming to find comfort standing behind Baba’s massive frame.

Oliver’s tone grew friendlier, as if he had suddenly become our trusted host.  He read from the paper in his hand.  “As I call your name, please step forward and follow your batman.  He’ll help you collect your suitcase so that you may get settled in.  Luncheon is at one sharp.”

Mason stood as tall as I, which put him at six feet tall and not an inch more.  I dutifully offered my hand.  Mason’s felt cool and damp, rivaled by even colder eyes behind an unreadable gaze.  This would be interesting.

“Eichen meet Wilson.  Hoffman this is…”

I stopped listening and hunted for my confounded suitcase.